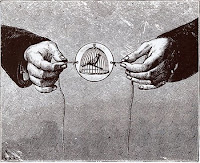 On one side: the classic SF fanzine – fiction, interviews, Q&As – any good geek knows how they work; hell, we’ve probably written for at least one.

On the other side: Twitter, the foyer of Social Media, the micro-blogging-open-sharing-web-community we all know and love.

Spin the string and what’s the picture? It’s @thaumatrope – the new micro-ezine. Nathan E Lilly, he of SpaceWesterns and GreenTentacles, has drawn these two sides together as a result of asking, ‘What use is Twitter?’

Thaumatrope is his search for an answer.

I like the idea of Thaumatrope – the concept of featuring twitter writers’ work to a broad, open platform and taking science fiction to a wider market is twirling my strings big-time… but I’m not sure the resulting picture is turning quite evenly.

Twitter’s immediate – a tweet is there-and-gone, a reaction instantaneous. It has to be simple. Thaumatrope’s already spinning with micro-fiction, interviews, editorial comments, each identified by a different combo of hashtags, brackets and @’s, oh my. To unravel this tangle from a lone tweet, you’ll need to click through to @thaumatrope, then through the bio to a ‘Twellow’ style layout that’s more clearly detailed.

It’s beautifully worked out – editorial fine-tuning dances punctuation in every tweet – but from a marketing/user viewpoint, that double-click-through is a hindrance. I know dedicated followers will get used to the grammar-code, but is it just too complex?

Which leads to the next point: how to expand organically using the Twitter mechanism. Put into basics: if I see something cool, I retweet it, I pass it on, I put it in my favourites so my friends can find it. To utilise Twitter’s massive open-platform potential, expansion is key – and that means learning the site’s ‘best practice’ communication. Twitter’s strong sense of community has grown from the understanding that you talk to other people – and about what they are doing.

Simply put? You shout each other’s names as well as your own… so I’m asking why the writer’s Twitter name isn’t in their piece of fiction? I know it shortens the space – but Twitter is spontaneous; sharing, expansion, visibility is invariably triggered by one tweet. When 120 characters of pure creative genius is flying up my screen, I want to know who wrote it, I want to follow them… and when I share how much I liked it, I want my friends to know too.

To me, Twitter is an open platform to bring something you love to a wider audience. Your brand, your blog, your politics, your hobby, your sexuality – everyone finds their own niche, chooses whom they follow (or not), and the community grows. You have to be clear, you have to be immediate, you have to be genuine and you have to understand the basic principles that Twitter, like Hell, is other people.

Thaumatrope is a very deft, thoroughly well-thought-out execution – it’s solidly true to the traditional fanzine and it’s a systematic approach to spinning the two diverse sides to make the complete picture. I’m not sure that Twitter is it’s ideal display medium – but this is only the beginning of an experiment. While it may not have many followers (yet!) the writers who’ve had submissions accepted (yes, you do get paid!) have been really pleased – they have genuinely sold a piece of their work, some of them the for the first time.

What use is Twitter? Above all else, it helps new talent, and supports the learning curve of new experiments. Thaumatrope is breaking new ground, supporting new writers; it’s been excellently researched and adroitly put together… but whether it can take advantage of Twitter's full might...

As an ezine, it can work for Twitter’s SF/F community – but I’d like it to be more.

Twitter pal tdaonp here. Unaware of your post I also wrote a blogpost about Twitter today. When I found this one I of course linked to it from mine. Nice companion piece :-)

Out of all the publications based around Twitter (@outshine @nanoism etc), only Thaumatrope does not published attributions with its stories. It is odd. Somewhat unpleasant, even.