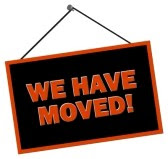 A moment of silence for the demise of this blog.

It’s been a faithful friend for over three years, born witness to some momentous changes and events, and been here for me when I’ve needed to rant my arse off.

Most notably, it saw my return to the SF Convention circuit and the first, slightly fearful, postings of my fiction online…

…and look where that got me.

If you’d like to find out what happens next, you can find me here.

Theodore Fisk has cancer, and 'Get Well Soon' follows his drug and alcohol fuelled decline. As pressure in his home and marriage escalates, inexplicable things start to happen in the house – Theodore’s nightmares seem to take on a more physical quality, and the fabric of reality gradually starts to unwind.

This film's very first ‘public’ screening will be taking place in a cosy little 24 seater screening room in Balham – the Exhibit. If you're keen on coming, please, please buy tickets now from Wegottickets:

You'll also get a chance to see ‘Golf With a Shotgun‘ which went to Cannes this year, directed by Kristof Deak.

YES! We're hosting one of our trademark multi-author signings - you know, the one where we all go down the pub afterwards.

At 6:00pm on Thursday June 23rd, Forbidden Planet 179 Shaftesbury Avenue, London will be playing host to: -

To promote the release of Elspeth’s new book SONGS OF THE EARTH, Forbidden Planet has gathered a host of science fiction and fantasy talent into one event – an event to bring writers and fans together and to promote interest in new and different kinds of fiction.

This is one of our trademark multi-author events, bringing our guests out from behind their tables and giving their readers a chance to meet them and talk to them about their work. An array of fantastic books will be on hand to be picked up and signed – including works by every one of the writers present...

...oh, you know how this works. Turn up, get books, hang out with your favourite authors, go to the pub.

Got to love it! 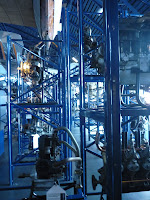 I saw a wonder today.

I took my Mother to the Science Museum. She’s never been; she’s lived on the edge of the city for many years, yet such things are a mystery to her. She knows Harrod’s, Harvey Nick’s, Oxford Street… but after that, the map says ‘Here Be Dragons’.

In the 60s, my Mum was air hostess, flying BEA and Jersey Airlines out of the Channel Islands. There are pictures of her, exquisitely glamorous with her little hat perched on top of her swept blonde beehive… I’ve no idea how I manage to be her daughter and such an irredeemable scruff. I knew the Flight exhibit would be special, but I don’t think I was prepared for how much. 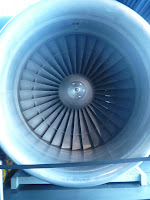 This afternoon, I’ve spent an hour watching my Mother walk through her past, seen the memories shadow her gaze and pass across her face like ghosts. I don’t know what they were – only pieces – but to see her youth suddenly shining like that brought a lump to my throat and I had to turn away.

It’s easy to think of our parents as through their lives began when ours did, to forget that they were young and foolish and reckless too. Seeing my Mum transformed like that, seeing the magic of her twenties and thirties, her life and hopes and dreams, seeing everything she loved and lived for…

Even typing it now brings tears to my eyes. 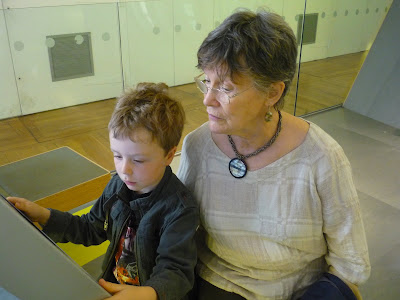 That was quite the most wondrous thing.

In the early 1990s, we used to save up for months to go to EasterCon.

A pack of us, crammed in the back of a van, laden with re-enactment gear and scrounged-together dressing-up kit (the word ‘cosplay’ hadn’t been invented). We’d rent a room between us, two in the bed and six on the floor; we’d sneak out to the local corner shop and come back laden with cheap food and salty snackage and two-litre bottles of bad white cider.

And it was awesome. 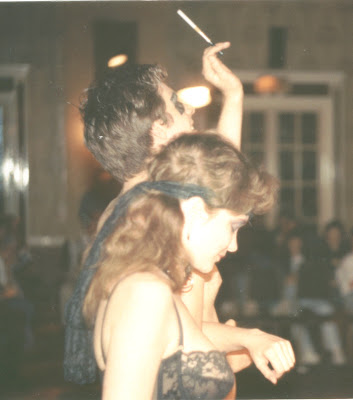 I remember attending Writers’ Workshops, wide-eyed and wanting to learn everything, participating in the Masquerade (the immortal comment, ‘S&M rubbish, 8/10’ has stuck in my mind ever since) and falling flat on my face when a picture of my mate and I in full (brief?) costume appeared in centre spread of Starburst magazine. I think it was Issue 5.

This year’s EasterCon, then, was rather a landmark event.

I’ve grown out of my costumes (sadly sideways) and these days the van is packed with books and not people. I’m still not quite over the novelty of having a room to myself, never mind the engorging breakfast… and the use of swimming pool, jacuzzi, sauna and steam was verging on surreal. 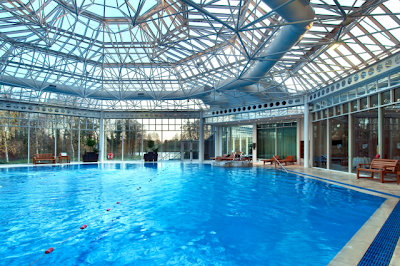 Not as surreal, though, as the deluge of congratulations and questions that followed the announcement of my deal with Titan Books.

The wide-eyed twenty-something that attended those Writers’ Workshops is not really that far in the past – and the realisation that sometimes these things do come true is still a little overwhelming. It’s magical, it’s scary, it’s not quite solid. There’s a part of me that still expects to wake up with my mates all snoring round me.

Slotted in with all of this were other moments of bizarre comedy – moderating a panel with the Guest of Hono(u)r and a line up of fantastic authors, being asked to attend a Con event as an author in my own right (which I didn’t) and seeing my name in print for the first time… it all added up to blow my little mind.

Though that might’ve been the (cringe) Johnnie Walker…

Back to the point though. Thanks to the ludicrous overpricing of the hotel, Alex and I resorted to sneaking carrier bags of provisions into the building. Between gasping in horror at the bar prices, and counting out our pocket-change like skint and errant kids, the irony of this wasn’t lost on either of us. 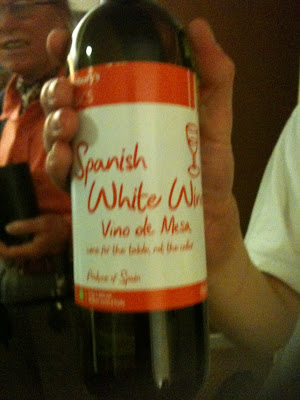 While ‘Illustrious’ could well have been renamed ‘RandomCon’, the humour of it all did reveal one core truth. Seems time goes in a circle – no matter who you are, where you go, or how your life changes, it’s all comes back to where it started.

And to who you started it with.

From the Titan Books website - as I'm still kinda speechless...

In the week preceding key science fiction and fantasy convention, EasterCon, Titan Books are delighted to announce the acquisition of worldwide rights to a fantastic debut fantasy novel and its sequel by first time writer, Danie Ware.

In searching for fresh talent to kick-start Titan’s new SFF enterprise, editor Cath Trechman unearthed exactly the kind of inventive manuscript she is looking for from within the Titan Entertainment group itself: a fantasy story written by historical combat enthusiast Danie Ware. As the publicist and event organiser for Titan sister company and cult entertainment retailer Forbidden Planet, Danie is already known and respected by many in the SFF community and has been writing epic fantasy at every opportunity her busy work schedule allows.

The currently untitled novel following Ecko, a cybernetics-enhanced warrior, is scheduled for publication in 2012. Cath Trechman says “Danie has created an extraordinary fantasy world, filled with rich, vibrant characters, and a story that is thrilling, compelling and wonderfully unpredictable. We at Titan feel very lucky to have found such a remarkable talent so close to home.” 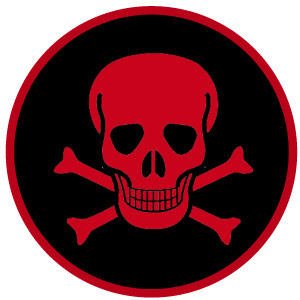 Hi, my name is Danie and I’m addicted to Foursquare.

Everywhere I go, if I can legitimately claim that I stopped, out comes the iPhone and I have to check in. Have to. No, you don’t understand, I HAVE TO.

People I’m out with roll their eyes and laugh at me – ‘on foursquare again’, but I can’t bloody help it, damn thing has given me OCD. I must add that extra location, that extra point. I must, dammit!!

It’s not like I’ve actually found a use for it – I’ve never had a foursquare bonding moment with a random SocMed stranger, nor gained a free coffee from a local ‘special’. So why the blazes can’t I leave it alone? 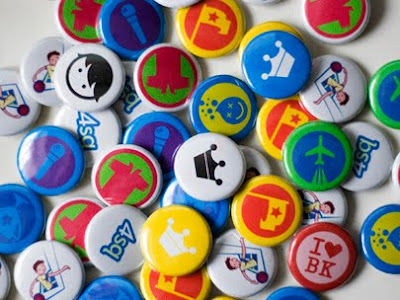 Badges. I need those steeeeenking badges. Just like my son at Beaver Scouts, getting a badge gives me a lift (plus I don’t have to sew the bloody things on). That magical ‘unlock’ email – hell, if I could powder that feeling, and sell it in little plastic bags, I’d be rich.

Or in the dock, one or the other.

But my OCD doesn’t stop there. 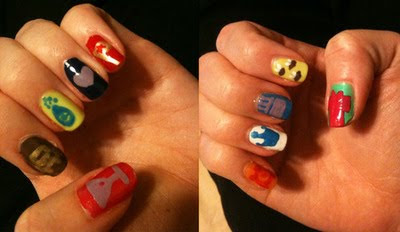 Foursquare’s points system lures me with a beckoning fingernail – in the earlier incarnation, there were points for adding new places and we rapidly ascended to be Mayors of our houses, workplaces, local supermarkets… (I was very amused when one of my colleagues added Titan House a second time as Titan Publishing – just so he could get those points too). Now, though, that compulsion has been expertly fine-tuned, being Mayor has perk-points, you can gain additional pluses for repeated visits in a week or for returning to a location when you’ve been absent for a while. Dear Gods, I don’t stand a chance, with all those lovely, handy increments so easily available… 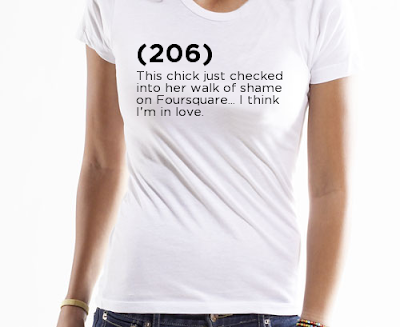 And even worse than THAT – Foursquare now teases and tempts you, coaxes you like the snake in The Jungle Book. The site offers a visible leaderboard; it tells you as you overtake someone, dangles the next person in your sights like a plump and juicy target. That same competitive urge that leads you to compulsively place the last eBay bid just so you can win… yeah, you know the one. That.

Obviously, the practical uses for business are colossal – I’m starting to look at it with a Marketeer’s eye. Honest. (For example, Foursquare is an urban thing; it’s amazing how it hasn’t caught on outside London).

But in the meantime, as those steeeenking badges rack up and the lists of my Mayorships increase, as my friends roll their eyes at my newest addiction, I’m wondering… 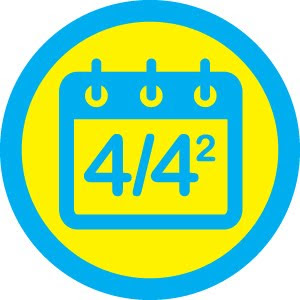 Would it be bad form to check in when I roll up outside the Foursquare Rehab Centre..?