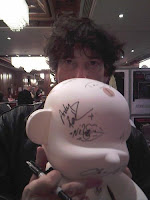 And then, there are the times when it works.

Even at an EasterCon, a six-foot woman with a wacky plastic MonQee draws attention.

Spending his days at the front of the Forbidden Planet stand and his evenings escorting me to bars and parties, MonQee rapidly became a vortex of attention. Creepy-cute and sinister with his white body and featureless face, everyone wanted to know what he was, and why I was carrying him. I found myself being smiled at, stopped and spoken to all over the hotel.

After I’d shamelessly accosted the first few authors, the snowslide rapidly became an avalanche. Saturday morning, Loudmouthman took some MonQee footage in the Dealers’ Room – and we gathered quite an audience. Saturday night, the rumour went round the Scandinavian Party that ‘you were no-one at EasterCon unless you’d signed the MonQee’… and then the authors and artists started looking for me.

MonQee was in the Con newsletter; they gave him his own membership. MonQee was in control tower central to meet the Guests of Honour before the Opening Ceremony. As MonQee continued his tour, he gained more fans, more signatures and more credibility.

Charlie Stross – quite unashamedly – signed MonQee’s arse. China Mieville sewed his lips together; Neil Gaiman gave him an eye – which freaked fans out for the rest of the Con. Bryan Talbot drew him a full back patch and Dave Devereux went where no pen had dared go before and signed his groin.

A full set of MonQee pictures can be seen on my Flickr page.

Exhausted from partying, MonQee is home, safely tucked up in his box awaiting forthcoming FP signings and his invite to the Arthur C Clarke Awards. More of his adventures will come.

MonQee’s travels continue: there will be more!

Whither Bartemkin: What Happens When It Goes Wrong? 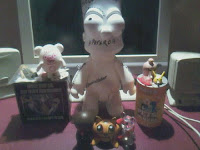 The saying goes: you learn nothing from success.
In the UK, the wooden ship of my reckless marketeering has a rocket-powered propulsion system. Take away the Forbidden Planet brand; row the same ship into a much larger, faster marina… and Bart, apparently, loses his head.
It seems the dynamic fusion of art toys with social media will wait for another day.
The idea’s sound – see Phil Campbell's wonderful shots of his signed Thor helm – but its execution? Needs the right arena.
This weekend, this rocket-propelled ship powers into waters where it’s very well known – along with a rabble of my colleagues, I’ll be at Orbital, the 2008 EasterCon, selling three years’ worth of signed books and goodies to the voracious fanboy public.
Guests of honour include Neil Gaiman, Charles Stross and China Mieville; there will be many other authors and artists there who’ve wielded sharpies for FP in the past – and know a thing or two about wacky art.
I’ve secured a new urban vinyl toy, larger than his Bart predecessor as I have a lot more time, and a far better unity of concept with market. Everything else remains the same – the idea of auctioning a one-off, totally unique art toy, a piece of urban vinyl history, will go ahead as planned – it’ll just take a little longer.
And that’s a good thing – time to learn, think and strategise and time to build a proper story.
As to Bart? Sadly returning home in an in a(u)ctionable condition, he’s enjoying a happy retirement. He’s sitting on my desk in my bedroom as my personal folly; I’ll make a donation to the Frozen Pea Fund myself for my mad-eyed souvenir.
Thank you to adelemcalear and colleencoplick, and to philcampbell and documentally for their performance as Norse Gods - and to all the people who put pen to plastic.
And keep an eye open – more art toy wackiness will ensue!
Posted by Danacea at 01:45 No comments: 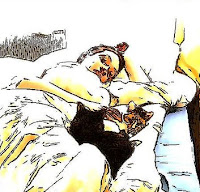 Yes, I’ve been tagged by the Loud Mouth Man to do the Boast Post – the fascinating fragments of my past that intrigue and perplex my readers. Well, here they are: -

This is not my first time.
I’ve shot my bolt with this already; tagged by Blue Knitter last summer, my previous ‘eight things’ are weird, wacky, wonderful – and true in every word. Promise me it won’t colour how you think of me, and you can read them here.

My first ever schoolgirl crush was on Peter Davison.
I was about 12 years old when he took on the role of Doctor Who. He was cool, he was smooth and he had a stick of celery in his coat. What more could a girl need? Wonderfully, when he signed at the London Megastore last month, he was still gorgeous!

I’ve performed in the Royal Albert Hall.
It was singing Verdi’s ‘Requiem’ and I was only in the chorus, but I still feel the intensity of belonging to something that uplifting and powerful. Alas, my voice now suffers from years of rugby songs round bonfires – but I still sing to the CD when there’s no-one home.

I was the first girl in my school Cadet Force to reach the rank of Sergeant.
Even when I reached the VIth form, Ardingly was still 75 – 80% male – and my high-pitched drill and field commands were the subject of much hilarity among my deeper-voiced counterparts!

I can’t drive.
No, I’ve never learned to drive. It’s not even, ‘I can drive but I’ve never passed my test’; I genuinely can’t drive. I’m not entirely sure why. I guess I’ve just never got around to it.

I’ve shared a house with a drug dealer.
He was only dealing pot, but the colourful characters turning up at all hours of the night still make me smile. At one point, there was a hookah in the living room with a bowl the size of my cupped hands and a pipe that reached out of the door and halfway up the stairs…

I was once offered a job as a professional cage dancer. Apparently.
About ten years ago, a guy gave me his card in a fetish club and told me to call him, there were employment opportunities awaiting a girl of my… ah… skills. While the card did say ‘talent agency’, I have a feeling the promise wasn’t quite what it appeared to be!

I owe my current job to complete coincidence.
One vaguely normal one to finish: in September 2003, I happened to be staying in Bristol with a couple of mates. Nick happened to pick up the Saturday Guardian, lying by us in the pub. John, joking, passed me the employment section and said ‘you could get this job’.
So I did.
The rest, of course, is fantasy. 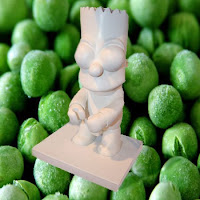 This weekend, Bart Simpson is gatecrashing SxSW.
Sneaking out of Forbidden Planet, he's hitched a lift with philcampbell to take ambassadorial advantage of adelemcalear and collencoplick. Yes, my Twitter budz are guerrilla marketeering for FP – and cash-raising for the Frozen Pea Fund.
Any Brit will tell you: FP are the cutting edge of new toys and trends. Bart stands 10” tall, is made from pure white vinyl and represents the perfect fusion of the urban Art Toy sensation with the massive pop culture credibility of The Simpsons.
He’s as hot as toys can get and he’s coming to a SxSW bar near YOU.

When you see him, please take a moment and marker pen and sign him.
The more signatures Bart collects, the happier he gets – and the more funds he’ll raise for the Frozen Pea Fund when loudmouthman and danacea put him up for auction!
Please remember that, being Bart, he likes attention – as he tours the event, collecting signatures, doodles and reputation, his progress will be photographed, blogged and recorded. Each person who signs him will be remembered and thanked… and the more names, of course, the better his sale will be.
Watch this space for Bart’s continuing adventures!
Posted by Danacea at 02:00 No comments: