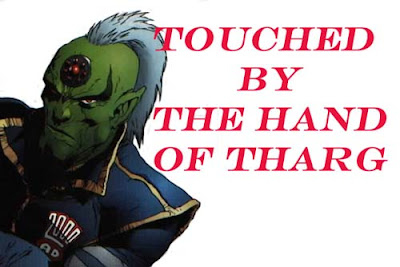 In fact, I think the cheesy title might’ve been; but when I was idly musing into my beer about the company’s 2000th signing, it was Marc Gascgoine who slapped me up the side of the head with a rolled-up copy of 2000AD.

Who better to guest on a Forbidden Planet than The Mighty Tharg?

Once again, we were down a man as Brett Ewins became tangled in transport, but were fortunate enough to gain the wonderful Brendan McCarthy – seemed Critical Signing Mass had been achieved. Sliding in badgeless to join his Heretic Brother was also Jim Swallow, the man who writes fighter females better than anyone else I know. 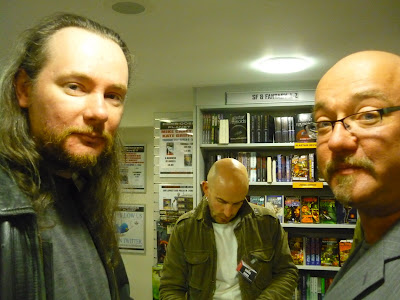 And so we embarked on our second free-form ‘lets-revolutionise-this-whole-signing-schizzle’ event. Fans surged, artists sketched, writers mingled and journos questioned – through the sketching table did spontaneously create queues… seems some old habits die hard.

I talk far too much about the changing face of the industry – about the FTL travel that should take sf/f right to the forefront of the web 2.0 Event Horizon. 2000FP was History in a Room – and reminded me how traditional the biz can be.

Many of the guests have a Twitter presence, but seem to keep it between themselves; it's not being used as their blogs are, to open out to readers and fans. Out the front of the Spice of Life in Cambridge Circus, Frazer Irving and Brendan McCarthy chuckled gleefully over the idea of a 2000AD Twitter strip (which I immediately named TWITWAR) and I’m really hoping they reach out and write this. 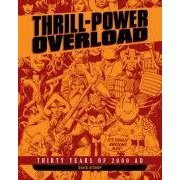 Why? Because it’s happening now. Why? Because it'll break a new market - and format. Why? Because it’s another Jumpgate, bringing the disparate worlds of SF and SocMed closer. A huge thank you to all of the guests who've blogged about what a fantastic time they had - events like this begin the Jumpgate construction. I'm hoping they go onwards and upwards.

Thirty years of combined history is a powerful thing…

…but not as powerful as how the industry could change, thirty years from now.

And that would be a real Future Shock.

The image at the head of this post belongs to Tharg the Mighty. Mess with him at your peril.