'No, You're The Rock Star' - FP's Ten-Author Signing 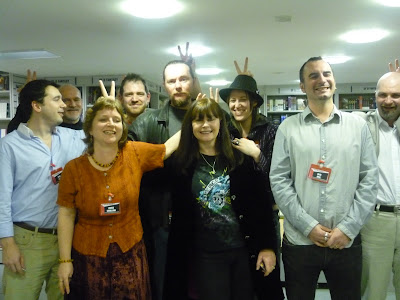 It started with a call.

When I asked David Devereux to come in and sign ‘Eagle Rising’ at Forbidden Planet, he muttered something innocuous about bringing in one or two of his mates. It sounded harmless enough.

The Magnificent Seven became eight, became nine, became ten. Thundering forwards with a strong belief that this was absolutely the Right Way To Go, we set light to the rulebook and we threw it away.

On Thursday evening, Forbidden Planet played host to: -
Sadly, we were down a man as Steven Savile got snarled up with a snowy airport and chairs designed by the Marquis de Sade – but the format (or lack of it) remained.

No barriers, no queues. No formal signing tables. With bowls of Pringles on stand-by and titles available by all the authors present, we let readers, writers, fans and journos mix it up, free-style. This wasn’t only about meeting your favourite author – this was about discovering new ones, about meeting new people, about opening your bookshelf and mind to a host of new concepts. 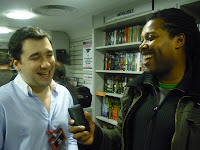 Jon Courtenay Grimwood described it as a ‘miniCon in a bookstore’ – a phrase David of GeekSyndicate picked up as his podcast tagline. (I think he got enough interviews to keep him busy for days!). Also in attendance was the irrepressible @loudmouthman – even wifi-less, he was uploading some kick-arse footage and promises edited highlights soon.

Not to be outdone, the wonderful Robert Rankin – a week after his own signing (though not demanding rayguns this time) – dropped in to hang out. He refused a name-badge, just wanted to join the fun.

This event was a total boundary-breaker – it’s been tried before, but never on this scale and never at Forbidden Planet London. With a guest list to rival any UK SF Convention, it’s generated huge amount of energy, enthusiasm and talk about the future. Many happy customers, happy authors, happy publishers and happy FP – as we all kept saying, ‘everybody wins’.

More pictures will be found on my Flickr page.

Lastly, a big list of ‘thank yous’ – to the much-undersung staff at the FP Megastore (who kick arse), to Jon and Gillian at Gollancz for their help and support, to all the authors who came in, and to the man who kicked the snowball off the top of the mountain, Mister David Devereux, Rock Star.