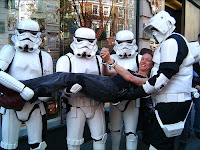 And when that uniform is iconic, faceless white armour, it’s a beacon of irresistible allure – and undeniable authority.

The ladies loved them, begged to be cuddled or hand-cuffed. Guys knelt on the pavement, fingers knotted behind their heads. I watched people, at gunpoint, lay full-length on the floor to have white boots planted on their backs. From elderly ladies to tiny cubs to suited corporates to brides-to-be, everyone adored the Stormtroopers.

The traffic hooted, chanted, cheered and sang; the local police stopped to join the fun. One ‘arrest’ turned out to be a pornographer who asked if the Troopers would have sex with his wife on camera… helmets still on. I think that startled even them.

Out of armour, the boys were pretty normal bunch – but kitting up, they underwent a miraculous transformation. Protected by their anonymity, they developed attitude and confidence; they carried themselves differently. Their speech patterns and accents changed. They became their own Brand, instantly familiar to all who saw them.

I understood their transformation… but how did they get away with making people kneel at gunpoint on a public pavement? Surely it was offensive, oppressive? Anywhere else, it’d be a tinder-spark to ignite a hundred political accusations. Wouldn't it?

Firstly, simply – they understand their audience. They’re performers; their manners are flawless and their perception (if not their visibility!) sharp – they instinctively understand how far they can go.

Second, more subtle – they’re fictional. They’re iconic of our childhood, playthings, not quite real. In their stylised-skull helms, their very lack of humanity makes them a game – and less than a threat.

Lastly, crucially – they’re both magnet and power-source, they generate energy and around them, people come to life. Everyone wants to be involved, wants the photo-op – wants a part of the legend for themselves.

And that energy expands – their presence at Forbidden Planet drew in the Bulgarian Eurovision entry (seriously), filming round the store. It drew in a random Vader – turning up in costume to join the fun. It drew in cosplayers, rickrollers, passing press and pausing tourists.

It also showed me something.

The event was a vortex – a literal ‘event horizon’. It pulled attention from every direction.

Thanks to cowfish, the London Flickr Group were there. On vlog detail, sizemore was arrested upon arrival – but took some awesome footage. There were eyes and wonder and cameras everywhere; events like this are generated, enhanced and maximised by the tools and friends of Social Media.

I have a feeling Vader’s Fist will punch out and go Viral.

I’ve always known how it’s supposed to work… it’s the first time I’ve ever been in the centre of it.

It’s kind-of a Force to be reckoned with.

There are a dozen reasons why it’s taken me nearly 20 years to do this, and another dozen to explain why I’m doing it now – but they’re both long stories and this is kind of a long story already.

Its working title is – has always been – Khamsin.

It’s a novel about culture shock – about a strange person, in a strange place, asking for an agenda that no-one has to give.

It’s a novel about the implacable strength of blind faith – about believing you’re right when the rest of the world knows you’re wrong.

It’s a novel about microcosm and memory – about how who you are is made up from everything you’ve been.

More than anything, it’s a novel about passion – about how it can drive you screaming round the edges of insanity… and about what happens when you lose it.

Don’t get me wrong, it’s genre fiction and while I harbour boundary-pushing ambitions, I have a long way to go. Again.

The link is here.

If you’d like the explanation, you’ll find it in the footnote.

This has been an advertising post on behalf of Danacea’s Daydreaming. Normal geek service will resume after Salute on Saturday.

I love the snow.

Not the mucky slush that slides grey over the pavements, I mean real snow – tumbling flakes and crunchy underfoot and cold down the back of my neck. I love to be out in it – I’ve walked in snow, camped in it, cycled in it, fought in it and fucked in it. It elates and intrigues me.

I love thunderstorms, crashing and passionate extremes of wild weather. I love wind-thrashed seas pounding on the shingle and the icy douse of the glittering spray.

And I love the sun – I turn my face to it and feel it lift my heart.

This morning, it was snowing – properly snowing, not the desultory sneeze I glimpsed through my hangover on Easter Sunday morning. As I watched, it blanketed the grass, softened the trees and a muffled quiet settled with the flakes.

My son has never seen real snow. While I broke the garden’s perfection with my cherry-red Docs, he stood in my bedroom window, his cub nose pressed against the cold glass. He wanted to go out in it, but was wide-eyed and wary and had to know it was safe.

When he came outside, he wouldn’t put his feet in the white stuff. He tracked in my bootprints to the sounds of the neighbourhood’s kids shrieking with glee. Then he stood, staring, as they pelted each other with snowballs and squalled defiance of the chill.

A couple of snowballs in the face, though, and he got the idea.

We joined in too – four thirty-something Mums giggling like girls as we dodged the incoming bombardment. We built the ubiquitous snowman and were pushing the kids round the garden in Joshua’s mini-Jeep, stopping to kick the caked snow from its tyres.

There were tears and tantrums, wet feet and and cold fingers, and a very excited dog. There was laughter and elation and excitement; there were kids soaked from head to foot and Mums yowling encouragement and offering cuddles.

There’s something about snow that just brings out the child in all of us.

It was a magical first experience for my small son.

The Curious Incident of the Fan in the Night-Time 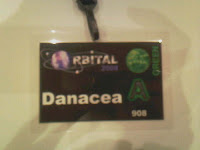 Last weekend, I was flying company colours at Orbital, the UK’s annual science fiction and fantasy convention – the first time in 14 years I’ve re-entered fandom.
Attending an sf con was like putting on old shoes. I know this world as intimately as FP’s demographic – I understand it, have lived in it and it holds no shocks for me. (Oh all right, it was great!)
Nothing had changed since 1994.
Four days’ heavy trading and four nights’ heavy drinking, though, showed me something curious: -
There were almost no younger fans. When I say nothing had changed, I mean it – the same people, now in their thirties and forties; dressed in the same costumes, only with a little more curve to fill them.
The biggest EasterCon in 20+ years – and I could see no Next Generation.
My Boss, Jon, noticed it; loudmouthman, decabbit, rnalxander and I drew many conclusions and my friend Liam Proven, long-time sf fan, has watched it happen round him.
The initial explanation is obvious – oh, they’re ‘on the web’. Fans don’t need to meet Bill Gibson, they can read his blog; they don’t need books for escapism, they can play Second Life. If they want conversation, it’s on a forum; signatures, they’re on eBay.
If traditional journalism is threatened by the common blog, then the fanzine is in serious trouble. Perhaps the novel itself is nearing its closing chapters.
Following that thought, since joining FP I’ve watched sf and fantasy explode through the covers of the paperback and become multi-format, street-smart and cool. Buffy, Battlestar, comic-book blockbusters, Doctor Who - Heroes! – these aren’t just for geeks any more. In television and cinema, nostalgia is the new cutting edge. FP rides this wave – the Megastores shine bright on the high street. But what does it mean for fandom?
My friend John Rivers has been a Who fan many years; he knows the young fans are still out there. New mass credibility means they don’t need to attend the generic sf con; creations like Who and Star Wars are so TARDIS-vast that they offer a whole agenda of their own events.
Like all communities, it’s become big enough to fragment – and it takes a powerful traction beam to pull the pieces together.
Orbital, as well as a central location, offered a guest list that should’ve been that traction. Neil Gaiman alone has enough presence – and the Dream Master was accompanied by the vision and humour of Charlie Stross, the radical brilliance of China Miéville and the sweeping imagination of Tanith Lee. Between them, they cover every angle and appeal to every corner of the Multiverse.
But they were not – quite – enough.
Why? Certainly they’re not accountable – their talks and panels were thought-provoking – even controversial – and their social presence always an amusing fan-magnet – if you didn’t find China in the disco, you’d find Charlie in the bar. To me, Orbital’s guest list shows that genre writing is changing, that fantasy and sf boundaries are being blown back. Evolution prevents stagnation and the genre adapts.
And, as writing adapts, so does format – the genre moves from paper to small screen and big, and more work is issued on the web. Ant Miller, my brother-in-law, commented that Cory Doctrow now publishes nothing on the printed page.
And, as format adapts, so fandom must move with it. If the classic EasterCon is to embrace a younger generation, it needs to stop reading books in a quiet corner. Its eyes and arms need to open wide and embrace more formats and different kinds of creativity. From anime and manga to film and television, from virtual publication and freedom of information to the wonders of live video-streaming (thanks, Nik!), it needs to become forward-thinking.
After all, hasn’t that always been the point of ‘science fiction’?
Posted by Danacea at 06:49 7 comments: