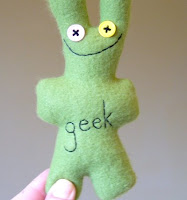 1: A carnival performer often billed as a wild man whose act usually includes biting the head off a live chicken or snake
2: A person often of an intellectual bent who is disliked
3 An enthusiast or expert especially in a technological field or activity
Posted by Danacea at 08:39 8 comments:

He’s met some top talent, been through twenty-two episodes of adventures and has had every part of his anatomy scribbled on… hey, hey he’s the MonQee, and he’s finally come to rest in the art toy cabinet at the Forbidden Planet London Megastore.

In addition to the host of names from the previous MonQee post, a thank you to the kings of UK space opera, Neal Asher and Alastair Reynolds. And a huge thank you, too, to Terry Pratchett himself for his approval for and support of the project: the fact that his email arrived on my birthday had to be a coincidence!

The MonQee Project is now live here. This completely unique piece of urban vinyl will be auctioned through MissionFish on eBay as part of the Forbidden Planet’s thirtieth anniversary celebrations. To find out more: watch this space!

All proceeds, of course, go to the Alzheimer’s Research Trust. The MonQee, we hope, will go to a very good home – he deserves nothing less.